The discrimination of fluid content and lithology in a reservoir is an important characterization that has a bearing on reservoir development and its management. For the unconventional reservoirs, such as shale gas formations, besides other favorable considerations that are expected of them, it is vital that reservoir zones are brittle. Brittle zones frac better and fracing of shale gas reservoirs is required for their production. Amongst the different physical parameters that characterize the rocks, Young’s modulus (Ε) is a measure of their brittleness. Attempts are usually made to determine this physical constant from well log data, but such measurements are localized over a small area. For studying lateral variation of brittleness in an area, 3D seismic data needs to be used. Computation of Young’s modulus from seismic data requires the availability of density (ρ). The computation of density in turn requires long offset data, which is usually not available. In this study, we propose a new attribute (Ε ρ) in the form of a product of Young’s modulus and density. For a brittle rock, both Young’s modulus and density are expected to be high, and so the Ε ρ attribute would exhibit a high value and serve as a brittleness indicator. As well, we demonstrate the usefulness of this new attribute for lithofluid detection, when it is used in conjunction with the product of bulk modulus and density.

The determination of lithology and fluid content distribution in a reservoir is a desirable objective for its characterization and subsequent management. Physical properties such as porosity and permeability make it possible to evaluate a hydrocarbon reservoir. However, the properties that have a direct impact on the relevant elastic constants are bulk modulus, shear modulus, and Young’s modulus, amongst others. Bulk modulus (κ) is a measure of a material’s resistance to change in volume and is known as incompressibility. It is treated as a porosity indicator. Shear modulus (μ) is measure of rigidity of a rock or resistance to deformation taken in a shear direction and is treated as a lithology indicator. Further, Young’s modulus (Ε), also known as stiffness modulus is a measure of the stiffness of the material of the rock. Historically, on the basis of these physical properties, geoscientists have attempted to delineate the fluid and lithology content of a reservoir. An estimation of the physical properties described above requires P- impedance (Ip), S-impedance (Is) and density. For computing these prerequisites, prestack inversion of surface seismic data is usually performed. Although, extraction of density from seismic data needs far-offset information, it is also true that the quality and amplitude fidelity deteriorate significantly at large angles of incidence. So, the computation of density is considered an arduous task.

In the absence of density, efforts have been made for characterization of a reservoir in terms of lithology and fluid content. For this purpose, Ip and Is are used for litho-fluid discrimination as Ip is sensitive to fluid, whereas Is is not. Goodway et al (1997) proposed the determination of rock physics parameters such as Lame’s constants (λ and μ) from Ip and Is and demonstrated that as λ (sensitive to pore fluid) and μ (sensitive to the rigidity of the rock matrix) may be difficult to isolate from seismic data, λρ and μρ, where ρ is density, can be easily determined from Ip and Is. Besides, these attributes show better discrimination of lithology and fluids in the λρ – μρ crossplot space. Russell et al (2003) proposed the use of the more generalized fluid term (ρf), instead of just the λρ attribute. Likewise, Katahara (2001) investigated the application of κρ attribute using well data, for enhancing the detection of fluid. More recently, Dabagh et al (2011) have shown a comparison of κρ and λρ, and that κρ comes out as a superior attribute for fluid detection.

The stiffness of a rock is an important property, especially important for shale gas reservoirs where fracing is employed for stimulation. Stiffer shales frac much better than ductile ones and enhance the permeability of those zones. Young’s modulus can characterize such stiffer pockets in shales and accordingly Santoso et al (1995) and Banik et al (2010) demonstrated the determination of Young’s modulus from seismic data by way of inversion. One limitation of Santoso et al (1995) approach is the requirement of density which as stated above is difficult to derive from seismic data, unless long offset information is available. Banik et al (2010) alleviate the requirement for density by using the correlation of Is or Ip and Young’s modulus from log data, and using that relationship for computation of Young’s modulus.

Considering the importance of a lithology indicator as well as an attribute that could yield information on the brittleness of a reservoir, we propose a new attribute, Ερ, which is the product of Young’s modulus and density. While Ερ accentuates lithology detection in terms of brittleness, κρ, intensifies fluid detection. Ερ facilitates a new domain, wherein fluidlithology discrimination can be achieved in a significant way.

Substitution of this equation into the first one yields

Thus, once we compute Ip and Is using seismic inversion this attribute can be derived directly. Further, above equation can be written as

If α turns out to be a positive number then it can be concluded that Ερ is a scaled version of μρ and would enhance lithological information. To this end we consider the following two cases.

For brine sand, it is known that

Using this it can be shown that

For the gas sand case, typically,

and so in this case Ερ can be computed as

We have discussed above the advantage of Ερ for fluid-lithology detection and also its implication for fracing brittle formations. We now demonstrate the computation of Ερ from well log and seismic data, and show its practical importance. In Figure 1, we show a comparison of the μρ and Ερ curves for a well in northern Alberta. Notice, the Ερ curve emphasizes the variation corresponding to lithology change more than in the Ερ curve. For ease in interpretation, we segment the input log curves and the results shown in Figure 2 stand out nice and clear.

For implementation of this analysis on seismic data, we considered a gas-impregnated Nordegg member of the Jurassic Fernie formation of the Western Canadian Sedimentary Basin. The Nordegg member of the Fernie formation varies throughout the WCSB. It consists of predominantly brownish, greyish and black shale’s. These “shale’s” vary from siliceous rich cherts and dolomites to carbonate rich shale. Due to the complex geology of the reservoir in the Nordegg, differentiating the lithology and fluid content is a challenge. The Nordegg – Montney interface is a regional unconformity which seperates the Jurassic and Triassic strata in the area. The Montney formation is composed of fine grained siltstone grading to fine grained sandstones, with limited shale content. There is a diagenetic dolomitic overprinting on the siltstones and sandstones. In local areas of the Montney there is a coquina facies made up of bivalves.

Thus, as the first step, simultaneous impedance inversion was run on the pre-conditioned 3D seismic data to obtain P-impedance and S-impedance volumes. Next, these impedance volumes were transformed into μρ and Ερ volumes as discussed above. In Figures 3 a and b, we show segments of vertical sections from the μρ and Ερ volumes respectively. Apparently, we notice Ερ has a higher level of detail than the μρ attribute. The upper parts of the figures exhibit lower values of the attributes as they correspond to the sandstone presence, whereas the higher values are seen in the lower part, verifying the availability of dolomitic siltstone in this zone. The time slices of μρ and Ερ attributes taken for the Monteny formation are illustrated in Figures 4a and b, respectively, the arrows indicating the points where very noticeable information on lithology is clearly seen on the section.

We have proposed a new attribute (Ερ) in the form of a product of Young’s modulus and density, which is a good lithology indicator. We describe it as a scaled version of the μρ attribute and illustrate that it intensifies the variation in lithology. This attribute can be derived seismically and have shown that we can determine the brittleness of a formation with it. Clusters in κρ – Ερ crossplot space corresponding to the litho-fluids are seen to be discriminated better than between similar clusters in the κρ – μρ space.

We thank Athabasca Oil Corporation for giving us the necessary permission for presentation of the results shown in this study. We also thank Arcis Seismic Solutions for permission to present this work.

Ritesh Kumar Sharma is from a small town in India. He received his B.Sc. degree from C.C.S. University Meerut, India in 2004 and his Master’s in applied geophysics from Indian Institute of Technology, Roorkee, India in 2007. In 2008, he came to Calgary to pursue his studies at the University of Calgary, with CREWES group, and received M.Sc. in geophysics in 2011. Before coming to Calgary, he worked with the Vedanta group, Udaipur, for one year as a geophysicist. He joined Arcis Seismic Solutions in 2011 and is still working there as a reservoir geoscientist. His areas of interest include reservoir characterization, seismic imaging and inversion.

Satinder Chopra received M.Sc. and M.Phil. degrees in physics from Himachal Pradesh University, Shimla, India. He joined the Oil and Natural Gas Corporation Limited (ONGC) of India in 1984 and served there till 1997. In 1998 he joined CTC Pulsonic at Calgary, which later became Scott Pickford and Core Laboratories Reservoir Technologies. Currently, he is working as Chief Geophysicist (Reservoir), at Arcis Corporation, Calgary. In the last 26 years Satinder has worked in regular seismic processing and interactive interpretation, but has spent more time in special processing of seismic data involving seismic attributes including coherence, curvature and texture attributes, seismic inversion, AVO, VSP processing and frequency enhancement of seismic data. His research interests focus on techniques that are aimed at characterization of reservoirs. He has published 7 books and more than 200 papers and abstracts and likes to make presentations at any beckoning opportunity. He is the Chief Editor of the CSEG RECORDER, the past member of the SEG ‘The Leading Edge’ Editorial Board, and the Ex-Chairman of the SEG Publications Committee.

He received several awards at ONGC, and more recently has received the AAPG George C. Matson Award for his paper entitled ‘Delineating stratigraphic features via cross-plotting of seismic discontinuity attributes and their volume visualization’, being adjudged as the best oral presentation at the 2010 AAPG Annual Convention held at New Orleans, the ‘Top 10 Paper’ Award for his poster entitled ‘Extracting meaningful information from seismic attributes’, presented at the 2009 AAPG Annual Convention held at Denver, the ‘Best Poster’ Award for his paper entitled ‘Seismic attributes for fault/fracture characterization’, presented at the 2008 SEG Convention held at Las Vegas, the ‘Best Paper’ Award for his paper entitled ‘Curvature and iconic Coherence–Attributes adding value to 3D Seismic Data Interpretation’ presented at the CSEG Technical Luncheon, Calgary, in January 2007 and the 2005 CSEG Meritorious Services Award. He and his colleagues have received the CSEG Best Poster Awards in successive years from 2002 to 2005.

He is a member of SEG, CSEG, CSPG, CHOA (Canadian Heavy Oil Association), EAGE, AAPG, APEGGA (Association of Professional Engineers, Geologists and Geophysicists of Alberta) and TBPG (Texas Board of Professional Geoscientists). 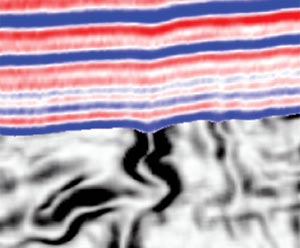