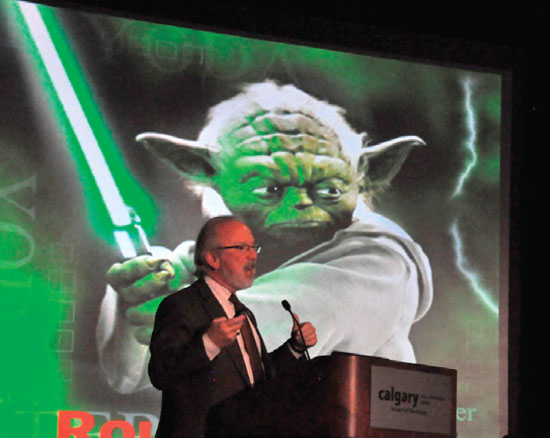 The marquee student event of GeoConvention 2016, the CSEG Foundation Challenge Bowl, was yet again a resounding success. The 10th annual edition of this event hosted by CSEG Foundation University Student Outreach (USO) took place on March 9th. The Challenge Bowl is a geoscience themed Jeopardy-esque quiz game for geoscience CSEG student members. Seven teams of students representing five Canadian universities participated. MC’d by the ever-entertaining Peter Duncan, over 130 people in attendance witnessed three heats of intense competition. Questions became increasingly more difficult as the evening progressed, challenging even our esteemed judging panel of Brian Russell, Andreas Cordsen, and Mel Best. When the dust settled, the team of Eric Rops and Scott Keating representing the University of Calgary emerged victorious with Romeet Gonsalves and Matt Lennon of the University of Calgary coming in the runner-up position. Congratulations to Eric and Scott, who have won an expenses-paid trip to Dallas to represent Canada at the 2016 SEG Challenge Bowl Finals this Fall. We would like to especially thank the CSEG Foundation and Imperial Oil for their financial sponsorship – without their support the Challenge Bowl would not have been possible.