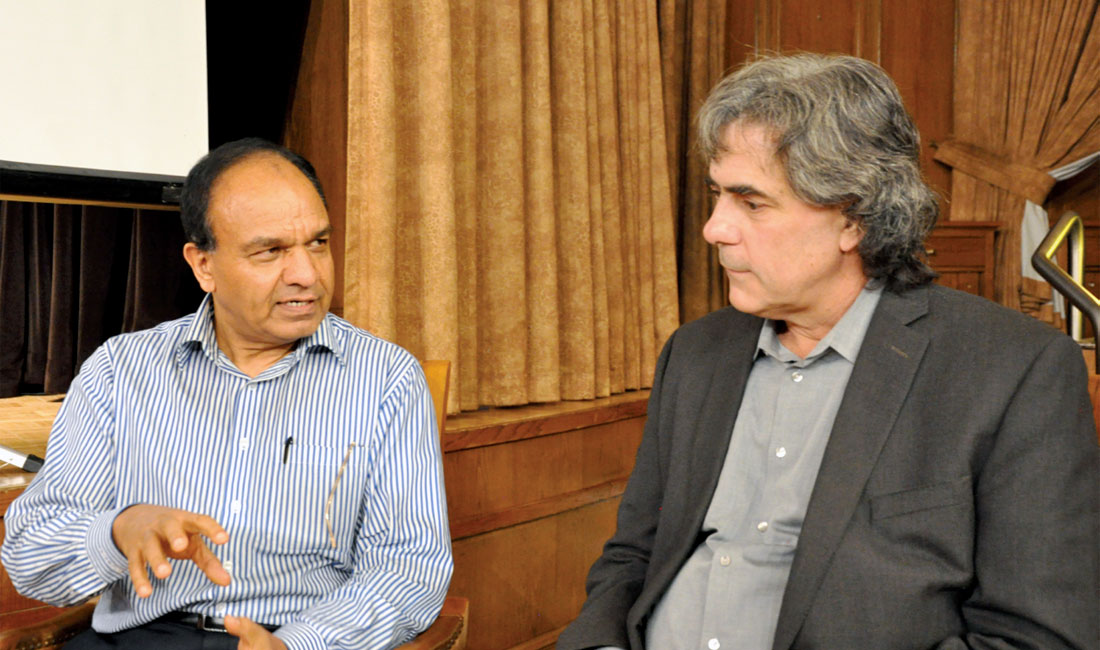 Paul Hatchell is Shell’s principal technical expert for 4D reservoir surveillance, and being the 2017 SEG Distinguished Lecturer, he delivered his talk at the CSEG Technical Luncheon on April 24th. Taking advantage of his visit to Calgary, we requested Paul for his take on several questions. Paul was very responsive and following are excerpts from his interview.

Paul, let us begin by asking you about your educational qualifications and your work experience?

Ever since you joined Shell in 1989, you have pretty much stayed put there. What do you have to say about how your career has shaped up?

Shell has been a great company to work for because there are many opportunities and interesting projects to work on. In my case, I spent time in research and exploration teams, worked on some of the best oil fields in the world, and got an opportunity to live and visit in different parts of the world.

What personal attributes helped you achieve the professional status that you enjoy today? Self-belief, hard work, something else?

Self-belief and hard work are certainly important attributes. In addition, I always to tried to find my own path rather than follow the crowd.

You have been a Distinguished Lecturer (DL) for SEG this year, which is indeed an honor. Tell us about your DL experiences and how it has affected your professional life.

During my DL tour I visited 40 locations and presented 50 lectures to over 2000 professional geoscientists and students. It has been a great personal experience for me, meeting people from around the world and hearing their stories as well.

Several case studies on time-lapse or 4D seismic have been presented over the last two decades. Could you briefly explain the promise of 4D seismic?

Time-lapse seismic is the only technology that lets us see what is happening between our wells. The promise of 4D seismic is about value that comes from 1) improved monitoring, 2) accelerating production, 3) reducing costs by optimizing field management, and 4) increasing the ultimate recovery of the field. In the right settings, we see 4D seismic adding significant value.

Apart from the repeatability of time-lapse experiments, what are the other mandatory requirements that are necessary for getting good results?

Besides location repeatability, there are two other requirements for successful time-lapse seismic: 1) the right rock and fluid properties, so that the changes you are looking for will be large enough to observe; and 2) constant near-surface effects, which can be very challenging in on-shore environments unless the sources and receivers are buried.

What causes the observed 4D acoustic response? Is it the pressure, saturation or both or something else?

The most common 4D response observed is due to changes in saturation such as water replacing oil, or gas coming out of solution when pressures are dropped below the bubble point. In compacting reservoirs, it is also common to observe changes in arrival times that occur above the reservoir as well as amplitude changes at the reservoir level.

For a target reservoir containing a gas condensate fluid under primary depletion, pressure rather than saturation changes would create the observed 4D acoustic response. Tell us how the fluid composition impacts the observed changes.

Fluid composition is very important. For example, it will be much more difficult to detect water replacing gas compared to water replacing a light oil. It is important to carry out feasibility studies to estimate the strength of the signal.

It is usually opined that diverse technologies like borehole seismic, permanent downhole sensors, intelligent well completions, smart data management, data visualization, modeling, etc. should converge, when linking reservoir changes to time-lapse. Could you comment on that?

The most important part of what you mention is that we need to integrate with other teams and data and this is an important step in obtaining the best time-lapse interpretation. Geophysicists cannot work solo if they want to influence field decisions.

a) Clastic reservoirs are more common in these areas and many have ideal rock properties for obtaining a good signal. There are also many non-clastic reservoirs where time-lapse seismic is successful including high-porosity chalk fields (e.g. Ekofisk, Valhall, Dan, …) and high porosity carbonates (e.g. reef build-ups in Sarawak). b) We are not limited to North Sea and GOM. There are surveys in all offshore basins (Brazil, West Africa, Malaysia, Brunei, Australia, …). c) This would be a good question for the seismic vendors. A significant percentage of the seismic budget spent on surveys acquired by Shell in the GOM over the past few years has been for 4D seismic.

In your DL talk you mention the application of AVO, spectral decomposition and impedance inversion in time-lapse analysis. Do you think the quantification of time-lapse changes has evolved in the last little while?

Certainly, and I expect this to continue in the future. For example, we are now shooting wide azimuth and long offset 4D data that allows us measure changes in new ways, such as using Full Waveform Inversion (FWI) that provides a detailed look at the velocity changes in the subsurface.

More recent offshore time-lapse seismic data surveys have employed ocean bottom seismic sensors. Tell us how time-lapse analysis has benefitted from OBS data, and the challenges it brings to processing of the data.

OBS sensors that are placed on the seafloor have made a significant change in our ability to acquire highly repeatable surveys from which we derive excellent 4D products. 4D processing becomes easier when the data are accurately repeated because we do not have to employ advanced processing algorithms to correct deficiencies in the acquisition. OBS surveys are also typically wide-azimuth and long-offset and are used for Full Waveform Inversion.

How big should the field be to benefit from time-lapse seismic technique economically?

This is a difficult question to answer, as it depends on the specifics of the individual fields and the cost of the seismic acquisition program. It is useful to carry out a value of information (VOI) exercise to make sure that the expected benefits cover the cost of the activity. Be careful in these VOI studies not to underestimate the value because it is often the case that surprises (the so-called “unknown-unknowns”) make up a significant chunk of the 4D value.

What are your other interests?

I enjoy music and trying to create some with my keyboard. I also enjoy seeing the world and learning about new things.

Do you have any words of advice or inspiration for young people considering a career in geophysics?

A career in geophysics will offer many rewards if you enjoy solving problems using science and data. If that is the case, get your hands and eyes on as much real data as you can so you can see the big picture, rather than relying on a small subset or synthetics. Listen to other colleagues from many disciplines to understand their point of view. Lastly, make sure to pursue multiple paths to find one that leads where you want to go.