Muon geotomography is a novel density measurement technique based on the absorption of cosmic ray muons in the ground. Naturally occurring cosmic ray muons emanating from the upper atmosphere lose energy as they penetrate the earth. These muons are absorbed at a rate that is proportional to the density of the material they pass through. Thus, by measuring the flux through muon sensors situated underground, the average density in the overburden above the sensors can be determined. Regions of anomalous density can be inferred from reduced muon flux arriving at the sensors from the surface along certain directions. By combining data from multiple sensor locations, a 3D model of underground density can be created. This has applications in mineral exploration near existing mines and in greenfield sites as well as block caving monitoring, oil and gas reservoirs, and other resource estimation and geotechnical applications.

The first recorded use of muon-based geophysics was by E. P. George in the 1950’s, who used muon attenuation to infer the average overburden of material above a railway tunnel. The famous physicist Luis Alvarez used muon attenuation to search for hidden chambers in an Egyptian pyramid (in that case, the search was for an enhancement of the muon flux due to a chamber filled with air instead of rock).

More recently, muon tomography has been investigated as a tool for mineral exploration. CRM Geotomography Technologies, Inc. is a spin-off from TRIUMF Innovations, the commercialization arm of TRIUMF, Canada’s particle accelerator centre. Begun in 2013, CRM has successfully proven muon tomography technology for mineral exploration by using its muon detectors to image multiple mineral deposits in North America, including at Nyrstar’s Myra Falls mine in British Columbia, Teck America's Pend Oreille mine in Washington State, and at Orano and Cameco’s McArthur River uranium mine in Saskatchewan. To date, the focus has been on proving and developing the technology by imaging known deposits and searching for extensions to existing ore bodies where underground infrastructure is in place. CRM is currently working on development of a borehole muon sensor applicable to greenfield exploration, and plans to achieve a deployable prototype in 2019. 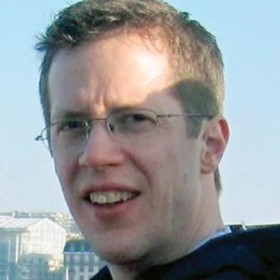 Doug Schouten received his PhD in experimental subatomic physics. During a post-doctoral fellowship at TRIUMF and CERN, he led a team doing initial measurements of the Higgs boson that led to confirmation of its discovery in 2012 by the ATLAS and CMS collaborations at the Large Hadron Collider in Geneva, Switzerland. After this, Dr. Schouten left academia and joined CRM Geotomography Technologies, Inc. in 2014, where he is now the Chief Technology Officer.